The Pioneer of Bansuri 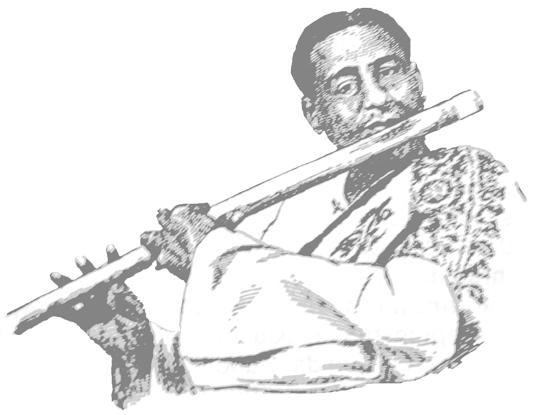 The great maestro and pioneer of Hindustani classical flute music, late Pt. Pannalal Ghosh was born on 24th July, 1911 at Barisal, now in Bangladesh. His real name was Amal Jyoti Ghosh. He was brought up in a family of musicians.

Young Pannalal was highly receptive and absorbed good music from various sources. It appears that during his young days at Barisal, Pannalal was active in the freedom struggle. He came to Kolkata during late 1920's, thereafter shifting to Mumbai (1940) in search of better prospects for his musical career. It was in no time that the nation recognized the maestro in him. His fame and popularity transgressed linguistic and cultural boundaries. Pannalal Ghosh resided in Mumbai till 1956, before making Delhi his final destination, where he passed away on 20th April, 1960.

At Kolkata during the early 1930s, Pannababuji received musical training for two years from his first Guru, the noted harmonium player and a renowned master in classical music, Ustad Khushi Mohammed Khan, under the traditional Ganda Bandhan form of tutelage.

After the sad demise of Khushi Mohammed Khan, Pannababuji studied under Pt. Girija Shankar Chakraborty, an eminent musician and musicologist. Pannababuji was influenced by the style of Ustad Abdul Karim Khan Saheb initially. The strongest influence on Pannababuji's music came from the systematic lessons under the legendary Ustad Allaudin Khan Sahib, from the 1947.

Pannalal Ghosh was a great innovator indeed! He was the first to transform a tiny folk instrument to a novel bamboo flute (32 inches long with 7 holes) suitable for playing traditional Indian classical music, and also to uplift its stature, bringing it at par with other classical music instruments. He is also accredited with the creation of a special bass flute, and introduction of the 6-stringed Tanpura, high-pitched Tanpuri and Surpeti into Hindustani music. Pannababuji's innovations are of great significance because there have been rare examples in the world's modern history of music when a musical instrument was created, as well as popularly accepted along with traditionally established instruments.

His playing style was a uniform and balanced blend of both, the Gayaki (vocal style) and Tantkari (stringed instrument style). This is evident from his available recordings, and also from the fact that he was very much liked not only by the eminent vocalists such as Ustad Fayyaz Khan, Pt. Omkarnath Thakur and Surashri Kesarbai Kerkar, but his understanding of the Taal (rhythm) was also appreciated by all the renowned Tabla players (percussionists) including Ustad Amir Hussain Khan, Ustad Allarakha, and Pt. Nikhil Ghosh. To quote Pt. Lalji Gokhale (disciple of Ustad Ahmad Jan Thirakwa Saheb), who accompanied Pannababuji on a large number of occasions said "it was impossible that Pannababuji would ever make a mistake in "Taal

Pannalal Ghosh, as the music director of the dance troupe of the princely kingdom of Seraikela state, visited and performed in Europe in the year late 1930's, and was one of the first classical musicians to have crossed the boundaries of India. After joining All India Radio, Delhi, as the Conductor of the National Orchestra in 1956, he composed several path-breaking orchestral pieces including Kalinga Vijay, Rituraj, Hariyali and Jyotirmoy Amitabha. His contribution in semi-classical as well as film music also was equally important, and his name is permanently linked to many famous movies such as Anjan, Basant, Duhai, Police, Andolan, Nandkishore, Basant Bahar, Mughal-e-Azam and many more.